During a two week trip this summer to France with my wonderful boyfriend, we enjoyed the sights, sounds, and tastes of a beautiful country. First stop – Paris! 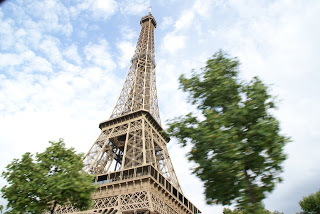 It was over 6 years ago since I last visited Paris as a tourist. This time, however, I experienced the city through the eyes of a local and my love for Paris was rekindled. After arriving early in the morning on a US Airways flight, Frederic and I hopped in a cab and headed to our accommodation in Paris, the Novotel Hotel Eiffel. It was centrally located, though cabs at the hotel were sparse. We settled in a bit, grabbed a light breakfast and headed to the Place de la Concorde. Wandering through the streets of Paris on a Saturday afternoon was delightful. Our first stop was Madeleine, which was a bustling area of the city. We stopped at two gourmet food stores – Fauchon and Hediard. The bold color combinations of the shops were indicative of the enticing food inside. Fauchon, with magenta and black, had the most incredible dessert display with multi-colored macaroons (the true French ones), decadent chocolate cakes, and a brasserie with fresh sandwiches and meats. I literally felt like a kid in a candy store. 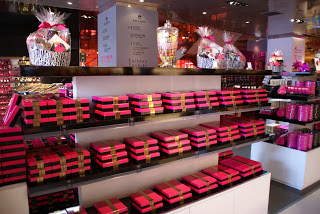 We also passed by the famous Laduree macaroons shop, but the line was too long so we didn’t wait. Although we did buy some later. Next was Hediard, with its red and black theme, that had some of the most delicious looking strawberries I have ever seen. They were miniature in comparison to the ones seen in California, but looked so ripe and luscious.

All the fruits and vegetables were presented so impeccably, that a person just perusing the store would want to buy everything in sight. Somehow I managed to resist the temptation and continued on to the next store.

Next was Mariage Freres tea. Now being of Chinese descent, I take my tea very seriously and was surprised at the wide selection of different melange (mixture in French) teas. True, the source of tea leaves originated in the Far East, but the Europeans managed to master the art of the blend. Not to be mistaken with “Will it Blend.”

Now the next stop was truly an experience – a very Parisian moment if you will. While we strolled past several designer stores, Freddie pointed out a very special landmark and then I knew we had to go inside. The place was none other than the historic Hermes store on Rue du Faubourg Saint-Honore. For those of you that don’t know (I didn’t), Hermes is a family-owned business that was founded as a harness shop in Paris in 1837. They are probably most known for their luxuriously printed silk scarves and their handmade bags, most notably the Birkin and Kelly bag.

Walking through the Hermes store was a feast for the senses. My eyes were captivated by the display of colorful scarves and my hands delighted in the silky soft touch of them. The fragrant smell of perfumes and colognes was scintillating to the nose, and the melodic sound of French being spoken was music to the ears. No celebrity incidents here (granted, we were there before it closed). Just delightful service and a very generous and unexpected memento from Freddie to remind me of our trip.