For those of you that have not been to Boulevard yet, when you step inside, you’re suddenly transported to an amazing place where the food is orgasmic. The food is impeccable, the service top notch, and the prices certainly reflect it. Now I’ll keep frenchie guessing whether it was truly a surprise or a grand stroke of luck, but nonetheless each dish was a pleasure. The crowd is a bit older, given the ambiance and the prices, but it was lively.

The only thing I wish is that we hadn’t eaten as much as we did at the Organic Beer and Wine Festival at the Ferry Building right before. BUT the wine and food there was so good! Did you know that organic wine is made from vines that have deeper roots and have less or no sulphites? Which is good for me, who has been known to be afflicted with the “glow” now and again:) One of my favorites from the evening was a Zin that I tasted from Tres Sabores, the Porque No 2007. It was by far the smoothest red I’ve ever had, and the proprietor was so friendly! I’ll most definitely be buying a bottle soon.
So after 5+ wine tastings, some mushroom chowder, sliders, fondue, and even some shrimp tempura, we walked over to dinner to have our main course;) However, our “appetizers” didn’t even come close to satisfying our hunger as did the food at Boulevard. We decided to order tapas style and try multiple appetizers to get some variety. The dishes we ordered were mostly from the sea. The first dish was the dungeness crab salad which was an excellent one to start with and wonderful to the last bite: 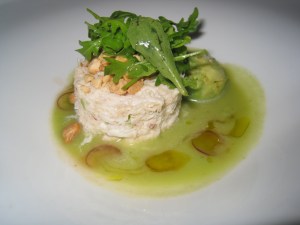 Next came the grilled scallops and seared foie gras which came out at the same time. Now I have to admit, I wasn’t a big fan of foie gras until I was in Paris this summer, where I had the best seared foie gras that completely opened up my eyes! For those of you that haven’t tried foie gras before, it’s usually duck or goose liver, and a fine French delicacy. The sauces for both were divine, and a perfect blend of sweet and savory, but I’ll let the photos do the talking: 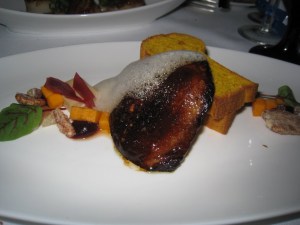 After the main dishes we decided we were in the mood for cheese. After all what kind of meal would this be at a fine French restaurant without a little cheese: 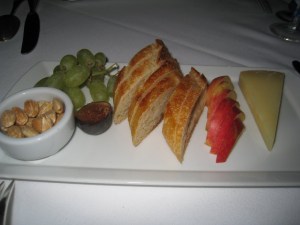 Now for the finale, not to be confused with this Finale, was our simply heavenly dessert – a huckleberry tart with creme fraiche, candied almonds, roasted figs and blueberries, accompanied with a divine caramel ice cream:

What a meal!! With the wine and food festival before and then both our first times at Boulevard made for an evening to remember. And of course the warm starry night along the Embarcadero was also a bonus. It will be tough to top this gastronomic experience, but I have faith in SF and in Freddie =) Until next time…