Wow.  What a way to start 2010!  For the first SF Eaters of 2010, I decided to do something a bit different and bring the culinary delights of the SF Bay Area to my home, and hosted several friends and Scott Spencer, of Spencer’s Pantry, in my home for an evening of gastronomic and visual delight.  A graduate of CCA, and experience at Boulevard, Spruce, and Aqua, Scott did not disappoint.  The food presentation was creative and inviting and knowing that many of the ingredients he used were from his own garden made the food taste that much better!  So onto the courses:

The hamachi was from the Tokyo Fish Market and the couscous and soy miso paste were fantastic!

Yum.  I’d let Scott know that boeuf bourgeon was a favorite and that was the inspiration for this dish.  I love beets and these pickled ones were perfect.

No, it’s not a cappuccino silly.  Don’t let the ceramic cup fool you.  The soup inside packed a lot of flavor and the tempting aroma of truffle danced throughout the kitchen.

This was a nice contrast to the previous dishes, since it was lighter.  And we learned a neat trick about making salads – when you put dressing in, put it along the SIDES of the bowl and then mix it around.  Then you won’t get random clumps in the middle. 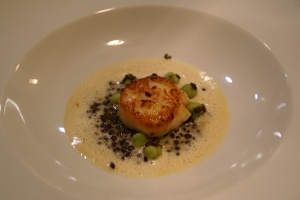 Probably one of my favorites of the evening.  The scallops were cooked in grape seed oil since that oil can heat up to extremely high temperatures and tasted fantastic.  The garbanzo beans and lentils were also a great addition. 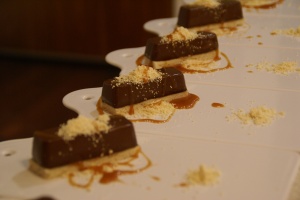 Now dessert is one of the best parts of ANY meal, and this one had so much going for it that I wish it hadn’t ended.  Ganache, salted caramel, homemade vanilla ice cream?  Sounds like heaven doesn’t it?  Nice serving plates too!  No ice cream in this photo, but you can just imagine the soft creamy goodness can’t you?

By the end of the meal, everyone was practically licking their bowls/plates and trying to divert attention from people still eating to try and snatch some remaining morsels on their plates!

In addition to a very food focused evening, we also had some scintillating conversation and some fantastic red wines.  Good show guys!

After this meal, I’m thinking the next stop for SF Eaters will be to the flavors of the East…  The Far East that is.  Until next time!